The playing philosophy of modern coaches like Jürgen Klopp and Pep Guardiola relies on the 5-second rule, where their teams need to win the ball back in a timespan of 5 seconds in case possession is lost. In this article we examine whether this tendency towards high or intensive pressing can also be found in the Jupiler Pro League.

As a preliminary note, we are not (and do not claim to be) football data specialists. We believe football data can be interesting to analyse the performance of our clients and their (future) clubs. Therefore, please feel free to comment. We welcome all feedback on how we could better interpret and use football data.

In one of their recent articles, Statsbomb introduced Passes Allowed per Defensive Action (PPDA) as an indicator to measure the intensity of a team’s pressing tactics. This metric is calculated by dividing the number of allowed passes of the attacking team by the total number of defensive actions (tackles, interceptions, challenges and fouls) of the defending team. In this way, PPDA measures the pressure and intensity a defensive team develops, when trying to win the ball back. Teams which embody the 5-second rule, will have a smaller PPDA value, as they allow a low number of uncontested passes to be made before being pressed.

Which area of the pitch is being pressed?

Not every pressing team will press that intensively in all areas of the pitch. Some teams will wait for some pressing triggers. Think of situations where the opponent crosses the defensive team’s half. To evaluate whether a team presses high or aims to win the ball back high on the pitch, Possession Regains in the Attacking Third (per 90 min) can be used. This metric measures how many balls are won back in deep areas of the pitch.

The below figure (Figure 1) puts this in practice by depicting both the Passes Allowed per Defensive Action (pressing intensity) on the y-axis and Possession Regains in the Attacking Third per 90 min (ball recovery location) on the x-axis for all teams in the Jupiler Pro League (18/19). 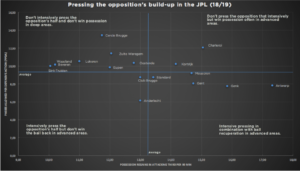 Looking at the above figure (Figure 1), the traditional top teams from the Jupiler Pro League seem to be the most intensive pressers when looking at Passes Allowed per Defensive Action (PPDA). Mouscron Peruwelz appears to be a surprise, being labelled as a team which is characterized by intensive pressing and high ball recuperation. This could perhaps be explained by their focus on picking up 2nd balls after having sent long passes to their target striker Frantzdy Pierrot.

With respect to high pressing, Antwerp seems to be the high-pressing machine of the Jupiler Pro League, where their ball recuperations in high areas are far above close competitors like KRC Genk. Coach Bölöni’s reputation of optimally preparing his squads physically seems to pay off in terms of (deep) ball recoveries.

RSC Anderlecht seems to be the most intensive presser of the Jupiler Pro League (lowest PPDA). Nevertheless, they appear to recover the ball not that often in deep positions (low possession regains in the attacking third) compared to e.g. Antwerp. The same goes for Club Brugge, who could also be labelled as an ‘inefficient’ presser.

Figure 2 below shows the Possession Regains in Midfield (per 90 min). It also indicates that Club Brugge and RSC Anderlecht lack behind on ball recoveries in midfield. We could therefore ask ourselves the question if the inefficient pressing of Anderlecht was one of the (main) reasons why Hein Vanhaezebrouck didn’t get Anderlecht running.

That being said, the lower-ranked teams in the Jupiler Pro League don’t press the opponent that intensively and rely on a low defensive positioning to win the ball back. A team like Sint-Truiden shows that you don’t have to employ a high and intense pressing tactic to be one of the candidates to be in the top 6.

The above analysis shows that Antwerp seems to be the high-pressing machine of the Jupiler Pro League, where their ball recuperations in high areas are far above close competitors like Anderlecht and Club Brugge. This doesn’t mean that this is the only way to approach a defensive organization. A team like Sint-Truiden who relies on less intense pressing tactics, has come out as one of the JPL’s revelations this year.